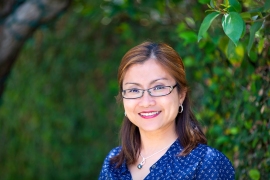 Shandra graduated from college with a major in Finance and Bank Management in her native Indonesia. After graduation, she became the manager of the Treasury Department of the Korea Exchange Bank in Indonesia, specializing in money market trading. She was a brilliant financial analyst and was well on her way to a very promising career. She was also an avid human rights activist who spoke out on behalf of labor rights.

When political turbulence erupted, she lost her job because of economic, religious, and racial persecution. Looking for an opportunity to work in the US, where she thought she would be free of danger, she responded to an advertisement for a job that promised a six month position in the hotel industry in Chicago.

It was not long after arriving in the bustling terminal at New York City’s JFK airport, that Shandra realized the brutal truth that she had been trafficked. The agent who met her at the airport brought her to a van and drove her to the brothel and took control of her passport and identification. Shandra tried to protest, but he put a gun to her head, and she immediately knew that her dreams were on hold.

Shandra found herself in an underworld of sex trafficking and prostitution that she never imagined before coming to the US. She was forced to perform sexual favors for 24 hours a day at different brothels throughout NYC and Connecticut. After many attempts, she was able to escape her kidnappers by jumping out of a bathroom window in Brooklyn.

But escape was not easy. Shandra was forced to survive without money or shelter. She was far from her family and her support system back home. She finally met someone who connected her to law enforcement, and she received a referral to Safe Horizon, a victim assistance agency in New York, where advocates helped her to get back on her feet.

But Shandra wasn’t satisfied with simply escaping. She exposed the criminal trafficking enterprise to federal and local law enforcement authorities. The traffickers were brought to justice and prosecuted to the full extent of the law.

After many years of living in silence, she was encouraged to join the movement against human trafficking. Shandra is now an inspirational speaker whose mission is to raise awareness and educate the community through her experience as a survivor of sex trafficking and domestic violence. She has spoken passionately to faith-based organizations, medical professionals, and legislators. She works with anti-human trafficking advocacy groups and is a legislative lobbyist in Washington DC. In 2011, she started a survivor leadership group called “Voices of Hope” through Safe Horizon. To ensure that people in Indonesia do not fall into the same trap she did, Shandra helped create a facebook page called “Stop Human Trafficking di Indonesia.”

Like all of the survivors at Survivors of Slavery, Shandra has dedicated her life to ensuring a life free of violence and captivity for people like herself.

TO BOOK SHANDRA TO SPEAK IN YOUR COMMUNITY

send her a message using the form below