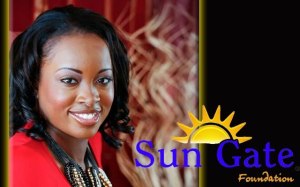 Meet Shamere McKenzie, the recently-appointed Chief Executive Officer of the Sun Gate Foundation, a national organization focused on providing support to survivors of human trafficking who wish to gain access to private, continuing, and/or higher education. Why is this mission important to Shamere? Because she herself was once a victim of sex trafficking, and as a young adult pursuing a college education, she has had to overcome many obstacles. “As a survivor, I know firsthand the stigma and difficulties faced by survivors of sex trafficking,” Shamere says, “And, as the recipient of the first Sun Gate Foundation scholarship, I am a walking example to other survivors that they too can pick up the broken pieces and live a life of their choosing.”  Click here to read the entire article written by Holly Smith.

On April 16, 2014, for the second year in a row, Shamere McKenzie spoke at California State University Chico as part of STOP (Stop Trafficking of Persons) Annual Human Trafficking Awareness Week. Over 190 students, faculty, and community members came to hear Shamere speak. Other speakers throughout the week included law enforcement offices, service providers and other survivors of human trafficking. Click here for a detail list of speakers.

Amanda Hovik, from the school’s online newspaper – The Orion – covered the event.

“Shamere McKenzie knew that she didn’t want to die. Her body told her to run, so she headed to a stranger’s garage and found a man and his 2-year-old daughter inside. “What are you doing?” the man asked. “Why are you running around here?” ……continue reading article written by Amanda Hovik

Originally from Southern California Amanda Hovik lives in Simi Valley with her family of five, her two brothers Bobby and Billy and her parents Bob and Ev. Growing up she struggled to find the confidence within herself and did not consider herself beautiful going through her awkward stages in junior high and high school. As she got older her focus shifted from her imperfections towards her studies in school. She began to attend regular tutoring sessions to help her maintain her GPA. The tutoring sessions became uncomfortable to attend and she was told by her male tutor to keep his inappropriate behavior a secret. She didn’t tell anyone until word got around that she was not the only person sexually harassed. With the help of her parents she realized that she needed to speak up. Since then she has become more confident within herself and has graduated with an associate’s degree in Behavioral/ Social Sciences. She transferred to Chico State last year and is majoring in Journalism. She currently lives in Chico and writes for the Orion, Chico State’s Student newspaper. One of the articles she wrote is Shamere McKenzie’s story about her experience as a human trafficking survivor and advocate for young women. Amanda is pursuing her bachelor’s degree in Journalism and hopes to graduate within the next two years.

Stacy Jewell Lewis presents “7 Layers Captive” a play which depicts her real life story as a sex slave in America. Her riveting one woman performance has left audiences breathless as she captivates the soul through music, poetry and dynamic storytelling.

Writer & Director of Stolen: From Playgrounds to Streetlights new one woman play 7 Layers Captive. A remarkable depiction of her personal journey through the dark world of sex trafficking and street prostitution.

7 Layers Captive is a descriptive real life story about Stacy’s horrific experience in what she and other experts call “The Life”. Through poetry, music and powerful storytelling, Stacy describes the fear, shame and eventual acceptance that kept her locked in the chains of her captor’s manipulative seduction.

If you’ve ever heard the questions asked “was it a choice?” or “Why didn’t she run?” 7 Layers Captive reveals the psychological and often emotional chains of torment that truly sheds new light on the term “Modern Day Slavery”.

Shamere Presents at Howard University for the 3rd Time

On February 19th, Shamere presented at Howard University again, this time she was among other experts in the field. Those presenting included Nick Sensely, Stacy Lewis, Det. Bill Woolf, Deepa Patel, Christine Raino from Shared Hope International, and more.

Stacy Lewis opened the panel discussion with her motivating spoken word, “Ten Years and one Day.” Shamere closed the conference with a powerful speech.

Read Shamere’s story and how pro bono work in Dade County is helping Shamere gain control of her life again. 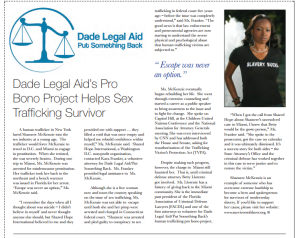 “Once a victim, once a survivor now a liberator”  by Hannah Terry

Click here to read how Hannah shares Shamere’s  story on her blog -” Once Sheltered”.

Hannah Terry is a devout Catholic, the oldest of 6 kids, and an avid American history buff. A recent college graduate, from Morehead State University she struggled to figure out what she is being called to do. Instead of doing what society, said she should do: go to graduate school, spend thousands of dollars, and come out with a degree she wasn’t sure she wanted, she decided to take a year off. She had the privilege to work with incredible people at Shared Hope International, which only increased her passion to fight modern-day slavery and to make a difference in the world. She loves to hike, camp, horseback ride, pretty much anything that involves the outdoors. She values honesty, hard-work, family and service work. She believes that God put her here for a purpose greater than herself. She does not know what that purpose is but is beginning to understand it. She believes that we must be the voice for those who don’t have one and fight for those whom society has forgotten.  Through her work and writing she hopes to reach one or two people who will pass on the knowledge and remember to fight for those once forgotten.

YWCA is dedicated to eliminating racism, empowering women and promoting peace, justice, freedom and dignity for all.

Thanks in advance for reading.